Spelunky is, without a doubt, my favorite game of the past several years. I was extremely excited when its brilliant designer, Derek Yu, agreed to come on our podcast a few weeks ago. (And perhaps even more so when I heard today that a portable PSVita version is in development!)

So what kind of game gets a designer so excited? Well, I’m glad you asked! The answer is one that is extremely, incredibly and completely… unfair. Wait, hold on? Haven’t I said that “unfairness” is a bad thing?

Before we start digging into details, we should first explain what Spelunky is. The game is a roguelike platformer with random levels. You play as an Indiana Jones-esque adventurer exploring abandoned mines, jungles and temples. Along the way are a variety of traps, enemies, items and equipment that can either aid or thwart your quest. If you’re curious what all of that adds up to, check out this YouTube video.

I could go on at length about how great the randomly-generated levels are, but I’ve already covered that ground in other articles. Today, I’ll be talking about the other (not so) secret ingredient which helps make roguelikes addicting – their brutal unfairness.

If you lose all of your health in Spelunky, it’s game over. There’s no saving or reloading – death is truly the end. And it’s exceptionally easy to die, as many traps and enemies will kill you with the slightest touch. Pretty unfair, right?

A game is unfair either when the consequences for failure aren’t commensurate with the resulting penalties, or when players feel like they’ve been subjected to a penalty due to circumstances outside of their control. It seems fairly obvious that Spelunky is unfair on account of it violating Section 1A of this definition.

A point I’ve made in the past is that fairness is tied to expectations. The first time I played Spelunky I had no idea what it was, other than a neat little platformer. After dying a few times I still hadn’t figured out how to get back to where I was. A friend told me the horrible, deflating truth – the only way to get back was the hard way. Every single time.

At this point a part of my brain suggested that maybe I should just put this game down. After all, touching one lousy enemy and losing everything is completely… unfair! Right? 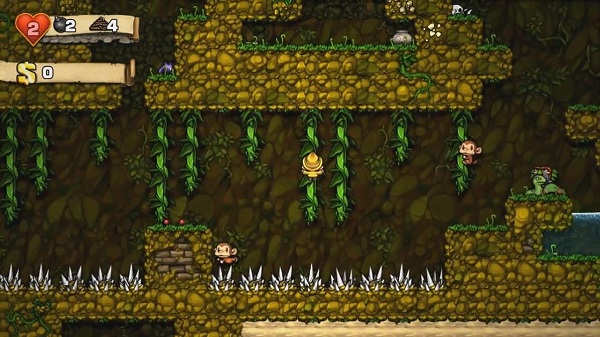 I’m the kind of gamer (and person) who enjoys a huge challenge. Regardless of the style of gamer you are, much of the satisfaction provided by interactive entertainment is the feeling of accomplishing something. Whether it’s finding the perfect arc in Angry Birds or beating Spelunky the hard way, we’re all seeking to be a part of something we’re proud of.

And this is why many of the rules for game design are not law. As long as the player feels like he or she is accomplishing something – i.e. having fun – it doesn’t matter how they got there.

That’s not to say that Spelunky is fun due to sheer dumb luck or in spite of being a poorly-designed game. While some might find it to be a humble platformer that stands out simply because it’s more than a little unfair, there’s a lot more going on under the hood than meets the eye.

What Spelunky Does Right

Much of Spelunky is in fact “fair,” according to our dictionary definition. While it has some of the heaviest consequences of any game out there, virtually everything that happens is within the player’s control. Let’s look at a few examples.

Enemies can jump out of pots and hurt you if you whip them, but there’s no risk if you instead pick them up and throw them. Arrow traps can always be spotted ahead of time, and you can nearly always avoid them or trigger them with an object (should you happen to be prepared and carrying one). All enemies have very specific movement and attack patterns that can be anticipated and exploited.

In spite of the first impression it gives off as a twitch game, the quality Spelunky rewards most is patience. Take a methodical approach to every obstacle you face and there’s a very good chance you’ll make it all the way to the end. But that assumes you know how to overcome those obstacles. And here’s where the critics who say Spelunky is unfair have some ammunition. 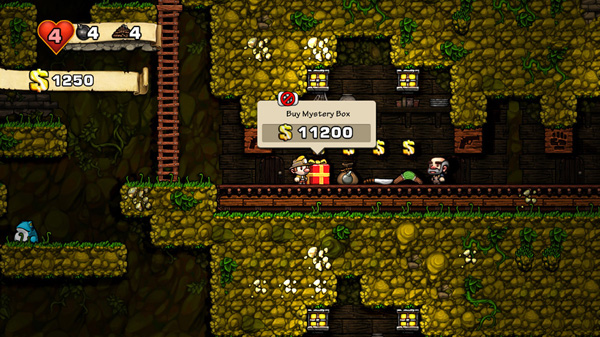 Spelunky is a roguelike, not just in the sense that if you die you have to restart, but also in that nothing is explained to you. “Welcome to our world! Here’s how you jump. Good luck!”

What is the activation distance of that arrow trap? How much damage does a big spider do when it hits you? What does it take to kill it? Is the camera really worth $15k?

There’s only one way to find anything out: the hard way.

One of my design tenets is that players need complete information in order to make strategic decisions (and by extension effectively accomplish something, and have fun). Spelunky and other roguelikes seem to completely eschew this rule, and yet it happens to be one of my favorite games ever. So what’s going on here?

The trick is that you do have all of the information you need – everything can (and will) kill you. This isn’t a case of bad user interface or a designer accidentally under-equipping players to deal with the challenges they will face. This is a game that you are supposed to try, fail at, and try again. By no means does this approach appeal to everyone, but it is not a mistake or flaw.

Learning and experiencing new things is one of the most enjoyable aspects of games. Roguelikes take this concept to the absolute extreme. Once you’re run out of new experiences the game is done. If you’re able to accept that losing your progress is simply an unavoidable element of making this journey, roguelikes open up an entirely new world of gaming.

However, this isn’t a design philosophy you can sprinkle in to improve flavor. It has to be the fundamental core. If a large RPG like Skyrim was identical except for death being swift and permanent it would have been nowhere near as successful. Skyrim is about exploring a large world while also continually building on past progress, and most players would have felt such heavy consequences out of place.

Could a big game like Skyrim have worked as a roguelike? Perhaps, but Bethesda chose to spend their resources building a detailed, fixed world. And wisely so. It’s impossible to have a landscape of that quality, size and scope that is also randomized. And roguelike without a procedural environment loses a great deal of the very exploration that makes it appealing to begin with.

Without exception, you would always rather have one amazing game than two mediocre ones unnaturally stuck together.

What Spelunky Does “Wrong”

There is one aspect of Spelunky that is less defensible, at least from the perspective of a mechanics-focused game designer.

Spelunky features what I like to call a “living” world. While players can shape it with their decisions, with or without input it will continue running along just as well. Spiders jump around, traps fire when something moves nearby, tiki men are killed by spikes, bomb frogs explode when damaged, etc. This is a very attractive quality, as it leads to emergent behavior – gaming’s holy grail.

The problem is that this “life” coupled with the game’s extreme brutality can result in some truly unfair situations. The best examples always involve the infamous shopkeepers. Their stores sell items, many of which are incredibly useful but also expensive. Players have the option of buying the items, trying to steal one of them and escaping, or killing the shopkeeper and snatching all of his goodies.

Because of how lucrative the latter two options are, the game imposes harsh penalties for engaging in even the mildest funny business. The shopkeepers have extremely itchy trigger fingers and will lose their minds and start jumping around and shooting at the slightest provocation. And from that point on, every shopkeeper will enter this state upon spotting you, with an extra one placed near the exit of each level just for good measure. If you’re hit by a single shotgun blast it’s game over.

Well… if an exploding frog happens to be struck by a trap and lands near a shopkeeper, guess what happens? It’s possible for the shopkeepers to declare total war on you without you ever having seen one. Several of my most frustrating games have ended in this exact manner.

Less “dramatic” examples of unfairness can also be found. There are rare times when you start a level with a trap or enemy armed with a boomerang pointed right at your face, sometimes with no chance to escape. If you happen to be desperately clinging to a single health point…

Is this truly unfair? By now you might expect me to say something like, “It might seem that way… but!” Well, in this case there’s no denying it!

But something we should ask is whether or not this is bad. The shopkeepers going insane because of circumstances outside of your control is overtly unfair, but it isn’t unlike having a promising run where you have the jetpack and shotgun “derailed” by a random dark level – a much more common occurrence in Spelunky. Would I change either of these things, were I the designer? Honestly, I probably wouldn’t.

Spelunky is an experience game. You immerse yourself in it, play it hundreds or even thousands of times, grimace after tragic near-victories, and pump your fist when you pop open a crate on level 2 and find a super-rare jetpack inside.

It’s a game you tell stories about months or even years later. The best stories are the ones you never forget – fair or not. Games with tight (“good”) design can sometimes be so locked-down that such crazy, memorable stories all but disappear. This is one of the reasons why many older titles still have dedicated followings. The “rougher” style of ‘anything can happen!‘ design turns the larger, more casual audience away, but those who stick around are treated to some of the best gaming experiences out there.

What makes Spelunky a paragon of design is that this all comes together not by accident or experiment, but by precise intention. It’s certainly not for everyone, but that’s not a fair criticism, as no game is.

I often say this, but it bears repeating. There are very few mechanics that can always be called bad game design, and certainly none that are always good.

What is always good is having a clear idea of your end goal, and what does and does not fit into that. The designer has two jobs: establishing an initial vision, and then acting as sieve and gatekeeper. This is the lone metric by which all game design should be judged. Spelunky is an excellent example of how a game that superficial appears to incorporate “bad” design can, in fact, be one of the most finely-crafted titles ever made.